It was all a dream, a social media dream. When I went public with my Hodgkin’s Lymphoma story, it was early 2016. I don’t think I even knew how to fully use Instagram. Essentially I’ve seen it all. The good, the bad, the ugly. I think social media is great because it helped me get through one of the most difficult periods of my life and connected me with some of the best friends I’ve met. They all had cancer too, duh. But like anything else, social media does have its faults. There will always be critics. See, that’s the thing about the internet. Anyone can hide behind a computer and say whatever they want. It gives people a sense of bravery that they lack in real life.

So, let’s talk about how to be happy in REAL LIFE, not just on the internet, something I’ve learned through out my Hodgkin’s Lymphoma battle and life after. Ready for some real talk? Well, here it is. 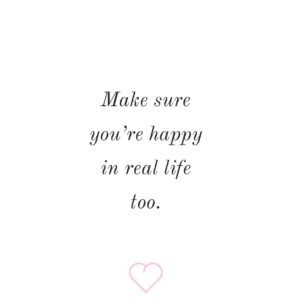 Before I was diagnosed with Hodgkin’s Lymphoma, I had it all. I had the looks. I had the job. I had the lifestyle, I had everything. And I had no idea what was about to happen to me. I was 28, living this glamorous lifestyle that wasn’t real.  I was always the girl that every guy would think was the most beautiful one in the room. I knew it too, which was my own demise. I knew I could have whoever I wanted. That was the problem. I was always focused on the next best thing. I was independent. My mother always taught me that if I wanted something, no one was going to give it to me. I had to go out and get it myself. And that’s exactly what I did. See, I had everything. And I thought that the things that I had were the most important in the world. They weren’t. They aren’t. But when I was diagnosed with stage 4 Hodgkin’s Lymphoma, everything was stripped from me. My physical identity, my health, my career, my sanity/mental health. Having everything meant absolutely nothing. I learned that pretty quickly. All that matters is that you are healthy, your friends and family are healthy, and that’s pretty much it. 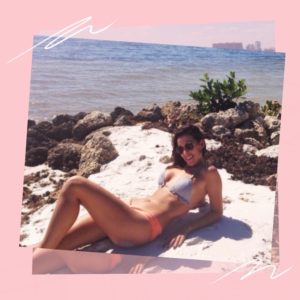 When it comes to cancer, life after cancer, or whatever difficult situation you’re going through, healing is not linear and everyone survives in different ways. Pain is real and so is survival. We are doing ourselves a HUGE disservice by comparing our lives to those on social media, ESPECIALLY when we’re going through a traumatic event in our lives. Let me be frank. Social media isn’t real for the majority of people that post on it. Everyone wants to be an “influencer” or a “blogger”, and any Ashley, Britney, or Cindy can write that they are a “public figure” or “personal blog” under their name.  These are the people that we are comparing ourselves to, which is why we are doing ourselves a disservice by turning so much to social media. We can be whoever we want on the internet. So with such a focus on social media, how the hell do we become happy in real life? It’s more simple than we think.

Radiation: finding strength in the struggle!